Denmark does the Braincell Boogie aka Hjernecelle Boggi

The last few days have been a whirlwind of activity. I joined SILK’s Emma Barrett on a Dementia Diaries tour of Denmark, hosted by MitdLab. (Mitdlab are a Social Innovation Lab for the Central Jutland region of Denmark)

We were warmly welcomed at Aarborg Airport by Jens Peter and Berit from MitdLab and taken to Aarhus for the beginning of our adventure.

The region has a population of just over 1.2 million, for context, Kent has nearly 1.5 million. They also have a similar need for Dementia Friendly Communities. We visited community centres, hospitals, schools and care homes during our trip and met many people affected by Dementia. This is really a global problem and the sharing of ideas and resources is a great way to tackle this problem across borders. The book itself was very well received, as you can see in this video: http://youtu.be/hbsEFrsbwW8

Pupils from the Klejtrup Music school created a Danish rendition of the Braincell Boogie for the residents and visitors of Klejtrup Free Care Home. We had a great audience of over 90 people that night, and there was a great discussion about the need to tell stories like this, and whether Denmark should do a local version of the Dementia Diaries. But it was decided by the group that it would be better to translate the Diaries as they are, as the stories themselves are universal. The context may change, but the emotions stay the same.

During the evening, I read out a few extracts from the book; I chose funnier ones as they usually works better with a large crowd. But during the Q&A section of the evening, a young boy stood up and said in Danish, “These stories are funny, my granddad isn’t funny.” He clearly had the weight of the world on his shoulders and needed something to relate to. I told him that the book wasn't just funny, and that there some very sad and serious stories too. We gave him a copy of the book and a link to our video interviews with children in Kent going through the same things he’s going through.

We watched him leave that evening, with the book grasped tightly to his chest. I feel like it might make a difference to him. We had a another group of children at the event draw on a big sheet of paper. I asked them to draw what made them happy. They drew animals, their family, their friends…. One even drew a snail wearing a scarf… But what was interesting was that they wrote in English. They wanted to say hello to children in Britain. They wanted to share and communicate. They wanted to connect.

This really summed up what we’re trying to do with the Dementia Dairies. We want young people to connect through the stories and to become brave enough to share their own. This visit to Denmark showed me that there’s a great need for this. And I think the Dementia Diaries could be a way for us to open up dialogue with children affected by Dementia all around the world. It certainly reminded me of the value that lives in sharing stories about Dementia, to know you’re not alone and that you’re not necessarily the only person feeling the way you feel.

There was also a great morning at MidtLab where Emma gave a presentation on exactly how SILK works and their focus on STARTING WITH PEOPLE. The audience was hastily scribbling notes the whole time as Emma went through a detailed process using cue cards and structures and motives. But then she pulled out a blank sheet of paper. She said, “none of this matters, all you need is a blank sheet of paper.” Because people don’t fit inside structures or processes. They are the structure. They are the process. And a blank sheet of paper opens up endless possibilities, as you can see with the children at the care home. The success of the Dementia Diaries is testament to this approach. 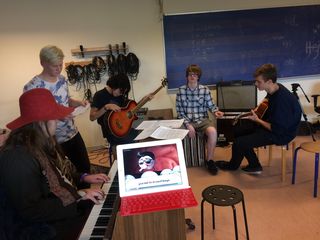