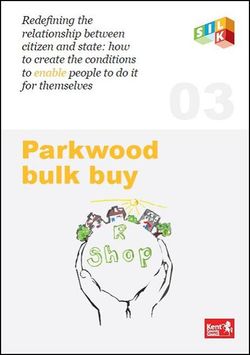 The R Shop Bulk Buying Project is based in Parkwood, Maidstone. The idea for the project came from a local mother who wanted to create something that would make shopping easier to access by bringing bulky items to the community and cheaper by by buying in large quantities. The idea was presented at a public event held in Parkwood (November 2008) where it was voted as one of the favourite ideas by the 50 plus residents who attended the meeting.

Since that meeting residents have worked alongside SILK and Activmobs to get the scheme up and running. The project has been renamed R Shop and is currently selling items and taking orders from within a community room at the local primary school.

A participatory film was also made to document the project:

Updates from the Bulk Buying team:

Posts from our blog about Bulk Buying

Where this project sits in the SILK framework

The Bulk Buying project sits within Diamond 3 of the SILK framework.